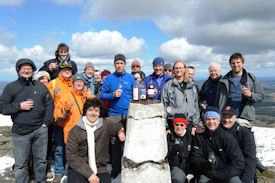 A new sales record has been set by the Spirit of Speyside Whisky Festival, with £30,000 of event tickets being sold within 20 minutes at the weekend. It took an hour for sales to reach the same milestone in 2013, and with tickets continuing to be rapidly snapped up, this year’s Festival is on course to be the biggest yet.

Tickets went on sale on Saturday (February 1) evening, and within the first hour 527 revellers had made purchases – most of them for multiple events. The value of ticket sales had reached in excess of £70,000 within 48 hours.

The Spirit of Speyside Whisky Festival, which is now in its 15th year, takes place at venues across the region from May 1 to 5. It is a signature event for Homecoming 2014, and will start Whisky Month – a four week national celebration of Scotland’s world class food and drink.

Festival manager Mary Hemsworth says, “A number of events sold out within a very short space of time after the launch, which shows just how eagerly anticipated these events are with whisky lovers around the world.

“Every year the number of ticket sales sold immediately on the day of the launch increases, but the level of demand this year has truly taken us by surprise.

“However, with more than 350 events on the programme, there are lots of activities to keep both whisky enthusiasts and whisky novices entertained. Of course much of our focus is on whisky, but the programme includes everything from music and walking to food and folklore.”

Ticket sales from Canada have been particularly strong, which may indicate that the number of visitors from North America could expand again this year. Other regions which are also standing out are the USA, Australia, Italy and Scandinavia.

Mary added, “We had a big push focused on Canada two years ago, and since that time key industry influencers have been blogging and writing about the Festival. It is very pleasing that we are now starting to see the results of that effort take shape.

“We have a very strong relationship with whisky festivals in Canada which is hugely beneficially. We believe that we will see a further increase in the number of overseas visitors this year and the fact that we are kicking off Whisky Month for Homecoming has certainly created some additional buzz around the international markets.”

Tickets for all events in the 2014 Spirit of Speyside Whisky Festival programme can be bought via the website – www.spiritofspeyside.com The Festival is also active on social media – facebook.com/WhiskyFestival and @spirt_speyside on Twitter.