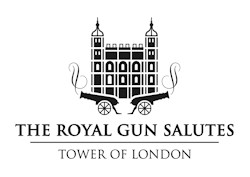 Royal Salute Scotch Whisky has become the first ever brand to be officially associated with the Royal Gun Salutes at the Tower of London.

The partnership will support the work of Historic Royal Palaces, the independent charity responsible for the Tower of London, and through this will see Royal Salute, the world’s leading luxury Scotch whisky, associated with the gun salutes at Her Majesty’s Tower of London that mark special royal occasions and other VIP salutes.

The partnership will be launched when the Royal Gun Salute is fired from the Tower of London, on 3rd June 2012 to signal the arrival of the magnificent river pageant in honour of Her Majesty’s The Queen’s Diamond Jubilee. 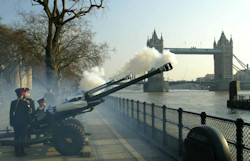 Gun salutes are customarily fired, both on shore and at sea, as a sign of respect or welcome. For the upcoming Diamond Jubilee, Royal Salute will support the official 41 Gun Salute from the Tower of London: 21 rounds to mark a royal occasion, and a further 20 rounds fired as it is held in the Royal Palace of the Tower of London.

General Lord Dannatt, Constable of HM Tower of London, says: “The Gun Salutes at the Tower have marked important State and Royal events since Tudor times and are fired in accordance with the regulations of this fortress. As a Trustee of Historic Royal Palaces, the charity that cares for the Tower of London, It is my great pleasure to thank Royal Salute for their valued and generous support.”

Neil Macdonald, Brand Director for Royal Salute, says: “We are delighted to be officially associated with the Royal Gun Salutes at the Tower of London. The occasion is particularly poignant as this royal tradition provided the inspiration for the brand’s name when it was launched on Her Majesty’s coronation in 1953.”

The five-year partnership will play an important role for Royal Salute as it continues to build upon its unique heritage. The partnership embeds a long-term relationship between Historic Royal Palaces and Royal Salute, which will be sealed with an official marque to be applied to Royal Salute Scotch Whisky packaging, and will allow the brand to provide unrivalled hospitality opportunities for guests in London.

As the world’s only exclusively prestige Scotch whisky, Royal Salute continues to redefine the pinnacle of the category and starts where others end with all whiskies matured for a minimum of 21 years.