A True First In Whisky : Direct From The Gates Of Valhalla, Highland Park Brings You The Mighty Thor 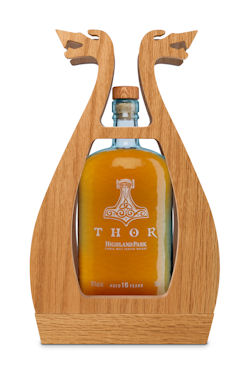 Mighty Thor remains one of the most renowned of all the Norse gods. A powerful and brooding figure, it is said that using his hammer, Thor could carve valleys out of mountains and that his enemies would quake in terror at the thunderous sound the weapon created. Son of Odin, the ruler of Asgard, Thor was avidly worshipped by Viking warriors as the defender of mankind and gods alike.

In honour of this great warrior and in celebration of its own unwavering Norse heritage, Highland Park brings you Thor. This stunning 16 year old single malt is believed to be the first whisky ever designed specifically around an individual’s character. With a natural strength like its namesake, drawing influence from the environment unique to Orkney, Thor is a truly elemental spirit. Distilled where sea turns to ocean, it represents a meeting point of nature’s forces, exuding a dynamic and bold character on the surface, but with an unexpected softer side at its heart.

Thor represents the first coming for Highland Park’s stunning Valhalla Collection; a range of four unique whiskies, released annually, taking inspiration from the legendary Nordic gods of old. Not for the faint hearted, only those brave enough to accept the challenge of Thor shall be rewarded with the ultimate experience; a whisky of divine power.

Bottled at a robust 52.1% abv this limited edition whisky comes housed in a unique wooden frame, which echoes the fearsome contours of a traditional Viking long ship.

Gerry Tosh, Global Marketing Manager, said, “Building on the success of The Magnus Series, we wanted to create an exciting new range which offers Highland Park fans something both affordable AND collectable.  This is no ordinary whisky and as we wanted it to truly reflect Thor’s character you will find some of the classic Highland Park aromas in there; it has a sweetness and a subtlety, but it will also surprise you with a little bit more smoke and dryness and there definitely is a lightning strike on your palate also.”

The Valhalla Collection is about more than great whisky, it gives an insight to the very being of the brand, its inspiration and raison d’etre.

We’ve put Thor first, as he is such a mighty character and deserves his rightful place at the very forefront of this range. Everything about this whisky bellows power; this is quite honestly a true whisky of the gods.”

Thor will be available from specialist independent whisky retailers, at the Highland Park distillery and www.highlandpark.co.uk at a RRP of £120.

Nose:  Concentrated and forceful, with an explosion of aromatic smoke, pungent fresh ginger, antique copper, stewed plums, and golden syrup. With water, earthy notes emerge, like a garden after a heavy rain shower.

Palate: Thor’s high strength grabs the palate and refuses to let go.  Initially dry, with fiery gingerbread then vanilla, blackberries, fresh mango, peach and hints of cinnamon. As its big flavours swirl around the mouth, some softer, sweeter notes develop, giving Thor and unexpected layer of complexity and depth.

Finish: The finish thunders on, leaving behind lingering notes of sweet vanilla and an intense spiciness.