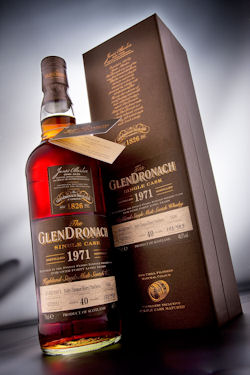 AS SUMMER slips away, the thought of long autumn and winter nights becomes slightly more bearable thanks to BenRiach and GlenDronach issuing new batches of limited release single cask bottlings.

As with previous batches, each vintage is hand-numbered and bottled at cask strength, at natural colour and non-chill-filtered.

The new BenRiach batch boasts twelve special bottlings ranging from 18 to 40 year-old – including a monster 1976 Classic Speyside at 57.8% proof which on the nose offers “a wave of stewed plums, damsons and sweet sultanas interwoven with fine leather and well-toasted oak”!

Meanwhile, over at GlenDronach, the six bottlings range from 17 to 40 year-old, and they include a superlative 1994 from an Oloroso Butt at 60.1% proof which on the palate gives “liquorice, aniseed and toasted hazelnuts developing around a foundation of chocolate orange sauce and rich old Oloroso sherry”.

Sales Director Alistair Walker said: “BenRiach’s uniqueness is found in the diversity of our whiskies. Our warehouses boast a stunning array of ages and styles, and when we select the casks to be bottled as single casks, not only are we looking for excellent quality but also to offer the consumers some variety. Batch 8 alone covers the Classic Speyside style, various finishes (including less traditional finishes such as Sauternes, Barolo and virgin American oak), and of course a couple of peated, smoky BenRiachs.”

The twelve BenRiach bottlings are:


The GlenDronach Distillery is famous for producing richly sherried single malts. The range of fruit flavours in this latest bottling is exceptional – from brambles and raspberries, citrus notes of mandarins and clementines to nuts, chocolate and dried Mediterranean fruits such as figs, dates and sweet raisins.

Alistair picked out the 1972 which exemplifies the classic GlenDronach taste.

"From an Oloroso butt, it's a big and full-bodied 39YO. As you would expect from such a mature malt, it’s incredibly concentrated and packed with sweet, fruity flavours. Delicious, and the perfect antidote to cold winter nights."

The six GlenDronach bottlings are:

BenRiach, and more recently GlenDronach, have become known for their annual ‘batch release’ of single cask whiskies, and these bottlings have gathered quite a following around the world. Alistair commented:

“We have a cult following for our single casks, and these releases sell out very quickly. It’s an important part of what we do, and being a relatively small independent enables us to engage with these small production runs.”