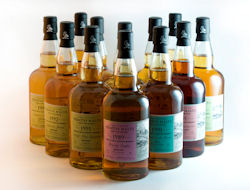 Edinburgh based boutique Spirits Company Wemyss Malts is delighted to announce the release of their largest parcel of single cask single malt Scotch whiskies to date. There are 12 casks released this month reflecting the strong demand from customers for high quality single cask Scotch whiskies.

Each cask is a celebration of the unique and contrasting appeals of the different Scotch whisky regions and the latest release covers five of the regions: from Islay, Speyside, Highlands, Lowlands and Campbeltown. Wemyss whiskies are each named after their natural taste and aroma and the full cask list of this release comprises:

Each cask has been selected and named by the Wemyss tasting panel, under the watchful eye of industry aficionado Charlie Maclean. There are only a few hundred bottles from each cask and the suggested retail prices range from £60 to £105. These bottlings will be available in selected retailers in the UK, EU and key Asian markets.

William Wemyss, Founder and Managing Director at Wemyss Malts, commented: “This is our largest release of single casks since the company started 8 years ago. We continue to work with some more established whisky markets like France, Germany, UK and Taiwan, but are also finding demand from new markets like China and Mexico.