The Macallan in Lalique "The Spiritual Home": Limited Whisky Edition 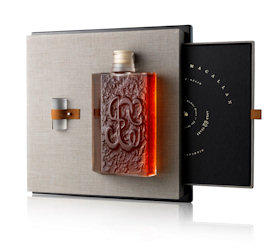 Designed and created by the legendary French crystal house Lalique, exclusively for The Macallan, and limited to only 400 individually numbered decanters, the Spiritual Home edition will be highly desired and eagerly anticipated.

David Cox, Director of Fine & Rare Whiskies for The Macallan commented, “Our inspirational partnership with Lalique is widely regarded as one of the ultimate luxury partnerships.  This fifth collaboration in The Macallan in Lalique Six Pillars collection further reinforces our commitment to working together to create beautiful and desirable objets d’art.

The Six Pillars of The Macallan

The Six Pillars of The Macallan are the inspiration behind this wonderful collection; they comprise those elements which combine to give our exceptional single malt whisky its supreme quality and distinctive character.  This is the penultimate decanter on an inspirational journey to the heart of The Macallan.  Easter Elchies House is the only manor home of its kind to be part of a distillery estate in Scotland and dates back to 1700 when it was built by Captain John Grant. 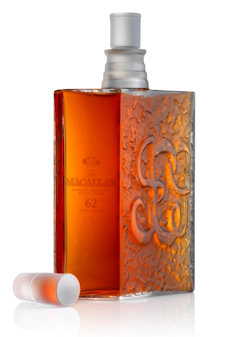 This collection has inspired interest from connoisseurs and collectors since its inception in 2005, representing a marriage of the finest and rarest Macallan single malt whisky and bespoke designed decanters, interpreting the Six Pillars, from the master crystal craftsmen at Lalique. There are very few distilleries that have the aged stock profile that we do, and we are privileged to have the opportunity to produce a magnificent 62 years old, originally filled to American oak sherry seasoned casks in November 1950. This is the second oldest Macallan ever released by the distillery since its foundation in 1824.”

Inspired by the artistic genius of Rene Lalique’s legacy and Easter Elchies House, The Macallan’s spiritual home, Lalique’s Marc Larminaux interpreted the harled surface applied to the sandstone walls of Easter Elchies House by creating a textured frosted surface on three sides of the decanter, an effect created through the use of a ‘digital stamp’ of the actual wall; in contrast three sides of the decanter have been left in clear crystal. One of the frosted sides features the bold initials, JEG, replicating the initials which are incorporated in the original date stone, which can be seen high up on the western elevation of Easter Elchies House. These are the initials of Captain John Grant, who oversaw the building of the present manor house in 1700. The date stone itself, with both initials and date, is replicated in its entirety at the base of one of the side panels of the decanter. Finally, the distinctive “crow-steps” at the gable ends of the house are interpreted through the steps on the neck of the decanter, leading up to the proud standing stopper, representing one of the chimneys. A striking, unusual design, this fifth decanter in the Six Pillars series again exemplifies the artistic creativity and inspiration of Lalique.

Silvio Denz, Chairman and CEO of Lalique, said: “Following the resounding success of the first four decanters in The Macallan in Lalique Six Pillars Collection, Lalique is proud to unveil the fifth.  After months of collaboration on the design of the new decanter, Lalique has created a superb example of craftsmanship that encapsulates the spirit of Easter Elchies House, the distillery’s spiritual home at the heart of The Macallan Estate.

“The spectacular shape and exquisite detail of this Fifth Pillar represent countless hours of painstaking work by Lalique’s master craftsmen.  We sincerely hope that the fortunate few owners of this sumptuous new decanter take as much pleasure in admiring it as we have done in creating it”.

In 2010 the relationship was taken to new heights with the creation of the Cire Perdue decanter containing the oldest ever Macallan ever released, at 64 years old. This unique decanter and its rare contents were auctioned by Sotheby’s New York in November 2010, raising a staggering US $460,000 for charity: water, an innovative charity dedicated to providing clean and safe drinking water for people in developing countries, as well as smashing the world record price for a bottle of scotch whisky.

The Spiritual Home decanter is available in the UK from December 2013 at specialist whisky retailers, RRP £16,000.

Read more about The Macallan at www.themacallan.com