The Macallan Distillery Set To Auction 1962 Bottle For Skyfall Charity 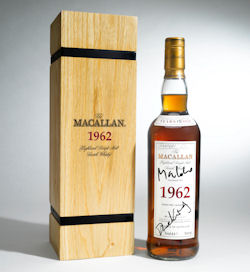 As the James Bond franchise celebrates 50 years, and SKYFALL becomes the highest-grossing Bond film ever, The Macallan has announced its intention to celebrate these achievements by donating a bottle of The Macallan 1962 from its Fine and Rare collection to be auctioned for charity.

The Macallan 1962 bottle will feature a unique signed label including signatures of Bond himself, Daniel Craig along with Javier Bardem and Bérénice Marlohe.

The auction is set to take place at Sotheby’s in London, as part of the company’s Finest & Rarest Wines sale on 17th April 2013.  All proceeds from the auction of this lot will benefit the Government Communications Fund (GC Fund) that support former and serving members of GCHQ facing hardship and distress.  At the request of His Royal Highness The Prince of Wales, this was one the charities that benefited from the SKYFALL world premiere held in October 2012.

1962 was the year of the first ever Bond film, Dr No, signalling the start of one of the world’s most recognised film franchises.   It was also the year that The Macallan 1962 was distilled on Speyside, Scotland.

Ken Grier, Director of Malts, Edrington, owners of The Macallan, said “Following on from The Macallan’s appearance in SKYFALL, we are delighted to further our association with the Bond franchise with this charity auction.  We are hopeful that the combination of the Bond link with the auction appeal of vintage Macallan will give us a great result.  The Government Communications fund is a very fitting recipient of the monies raised.”

Today The Macallan is one of the world’s most collectable whiskies, sitting at the top of the auction table and the owner of the current Guinness World Record™ for the most expensive whisky ever sold at auction. “The Macallan is a First Growth Malt, the tops, with all that this means in terms of excellence and excitement”comments Serena Sutcliffe MW, Sotheby's International Head of Wine.