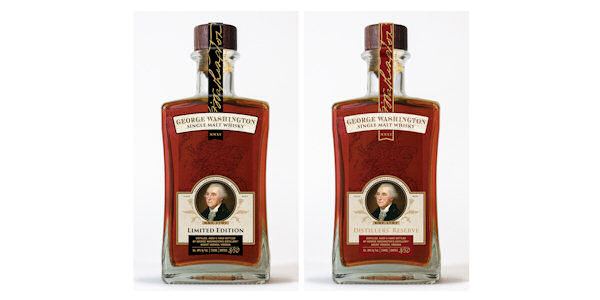 Mount Vernon, VA – Raising a glass to celebrate the Scottish heritage of American distilling, three of Scotland’s top distillers today joined with a representative of the Scottish Government, Mount Vernon, the Distilled Spirits Council and the Scotch Whisky Association in previewing the first-ever Scottish-style Single Malt made at George Washington’s Distillery.

The whisky-making process began in March 2012 by grinding one ton of 100% Scottish malted barley, both peated and unpeated, in George Washington’s reconstructed, water-powered gristmill. Using 18th-century methods, the distilling team produced 10 gallons of whisky considered to be of such fine quality and proof that a second distillation was unnecessary.  This whisky was barreled immediately as Distillers’ Reserve.  An additional 10 gallons, barreled as Limited Edition, was then distilled twice.  The whiskies were aged at Mount Vernon for a total of three years in used Bourbon casks, re-coopered in Speyside, Scotland, and in the final months, were aged in barrels that previously held Madeira wine, which was a favorite at Washington’s table.

A set of the rare bottles, both #1 of 30 of the Distillers’ Reserve and Limited Edition, will be the featured item auctioned tonight to raise money for Mount Vernon’s educational programs at DISCUS’ 14th annual “Spirit of Mount Vernon” industry gala.  Remaining bottles will be sold for charitable purposes.

Mount Vernon President Curt Viebranz noted, “Just like the Single Malt whisky we are releasing today, Mount Vernon’s partnership with the Distilled Spirits Council gets even better with age.  The Distilled Spirits Council’s generous support has profoundly impacted the way visitors experience George Washington’s beloved estate, and it has changed the way people view our Founding Father. We are honored to welcome them, and these Scottish master distillers, back to George Washington’s home.”
Distilled Spirits Council President and CEO Peter Cressy stated, “This Single Malt project draws a straight line in history from Scotland to America.  Reconstructing George Washington’s Distillery was a seminal event in the history of the American distilling industry.  It highlights our Founding Father’s entrepreneurial spirit along with the rich heritage of our spirits industry in the United States.”

Chief Executive of the Scotch Whisky Association, David Frost, said, “Scotland and the USA have a proud, shared distilling heritage, which is so clearly demonstrated by the Scottish influence at George Washington’s Mount Vernon distillery.  We’re delighted to celebrate that connection, with three great Scotch Whisky makers collaborating to create a unique Single Malt that will raise funds for a range of charitable and educational purposes.”

Donnie Jack, Scottish Affairs Counsellor for the Americas based in the British Embassy, commented, "The links between Scotland and the USA go back to the founding fathers.  Like our national drink, Scotch Whisky, the bonds between our two nations have matured over time.  Today's celebration of the close collaboration between Scottish distilleries and the distillery at Mount Vernon is testimony to the enduring nature of our relationship which, I am convinced, will continue in the future.  I congratulate all those on both sides of the Atlantic for their efforts, and I hope that the first bottles being auctioned for charity will attract considerable interest."

Dr. Bill Lumsden, Director of Distilling for The Glenmorangie Co., said, “To make great whisky, it really does take time and patience for the spirit to mellow and develop more complexity.  But for our unique 'partnership' Single Malt, between Scotland and the United States, it just seems like yesterday since Andy, John, Dave and I were actually distilling the spirit at Mount Vernon.  In reality, it has now been in wood for three years, and the end result is as delicious as it is unexpected!”

John Campbell, Distillery Manager for Laphroaig, added, “I’m grateful to be a part of the team behind the first-ever George Washington’s Distillery Single Malt.  It’s been an honor to collaborate with renowned industry talent on this project; we were each able to contribute the skills and techniques that differentiate our distilleries to create a truly special and one-of-a-kind Single Malt that epitomizes Scottish Whisky-making tradition.”

George Washington’s Distillery Master Distiller David Pickerell stated, “It was pure joy being involved in this project with such luminary distillers from Scotland.  We (at Mount Vernon) learned so much about the production of Scotch through the process, and while we can’t call it Scotch because we made it in America, I am proud of the product we produced.”

In 1797 George Washington's farm manager, a Scot named James Anderson, convinced his employer that producing whiskey made from corn and rye grown on the plantation would be a natural complement to his milling business.

Washington was initially skeptical but soon granted permission to build the 2,250-square-foot distillery, making it among the largest whiskey distilleries in early America.  By 1799, Washington produced 11,000 gallons of whiskey, worth the then-substantial sum of $7,500.  The distillery ceased operating in 1814 when the building burned.

Beginning in 2000, with a $2.1 million grant from the distilled spirits industry, Mount Vernon began the excavation and restoration of the distillery.  In the Fall of 2006, the distillery was officially dedicated at a ribbon-cutting ceremony presided over by Britain’s Prince Andrew and then-Virginia Attorney General Robert McDonnell.

Previously, master distillers have recreated George Washington’s Rye recipe, with the first two bottles selling for $100,000 in 2006.  Since then, small batches of limited edition Rye have been produced periodically and sold to the public.  Other specialty distilling projects have produced Rum, Peach Brandy and Apple Brandy.  All of these were distilled spirits Washington either sold commercially or entertained with at the mansion table.