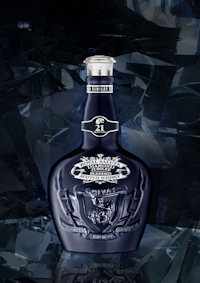 Created in 1953 to mark the coronation of Queen Elizabeth II, Royal Salute is this year continuing with tradition by celebrating the Queen’s 60 year reign with the launch of the Royal Salute Diamond Jubilee Limited Edition.

In keeping with the Diamond Jubilee theme, the porcelain flagon is finished with a rich, royal blue glaze. Presented in a hand-crafted display box that elegantly showcases the bottle, Royal Salute Diamond Jubilee will have a strong on-shelf presence in over 20 markets, with innovative retail displays, inspired by the light-reflective qualities of a diamond, highlighting the exceptional quality of the whisky within.

Neil Macdonald, Global Brand Director for Royal Salute, says: “Royal Salute was originally created to mark the coronation of Queen Elizabeth II. We are therefore delighted that this Royal Salute Limited Edition will celebrate the Diamond Jubilee – as it is only the second time in history that this milestone has been achieved by a British monarch.”

Royal Salute Diamond Jubilee is a limited edition that will only be available in 2012 during the Jubilee celebrations.

The new expression is available to markets globally from March 2012, with a recommended minimum retail price of $164 for a 70cl bottle>