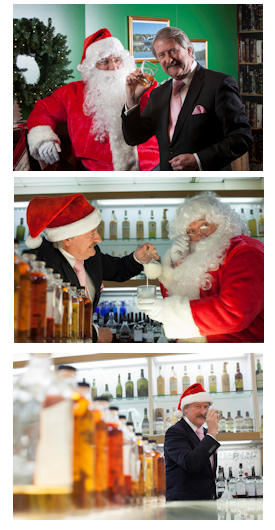 With just over 700,000,000 children around-the-world to deliver presents to, Santa’s sleigh will travel a whopping 212,030,000 miles at the speed of 650 miles per second. But that’s not the only fantastic fact associated with Father Christmas – generous festive treats left out by mum and dad on Christmas Eve means that Santa will be offered around 233,000,000 units of alcohol in the space of one night.

Even with his special powers – and presumably magic metabolism – Santa needs to be careful as us ordinary festive revelers, according to Richard Paterson, master blender for Whyte & Mackay whisky, otherwise known as ‘The Nose’ (no relation to Rudolph).

Richard has penned ‘Dear Santa’ letter with a difference, designed to keep the ho-ho-ho in the holiday season for jolly old St Nick by making sure that he looks after himself properly and doesn’t over-indulge.

“Like the rest of us, I’m sure Father Christmas is keen to have a good time this Christmas,” says Richard. “But entering into the spirit of things doesn’t mean that anyone needs to over-imbibe. In fact, it’s important that Santa – as with everyone else – stays responsible in order to get the very best enjoyment from this special time of year. A few simple hints can help do this, without losing any of the fun of festive celebrations. We can all take something from our pointers to Santa. After all, the only one who’s meant to have a red nose at Christmas-time is Rudolph!”

Whyte & Mackay will post additional tips, not just for Santa but also other Christmas party-goers on its Facebook page – www.facebook.com/whyteandmackay.