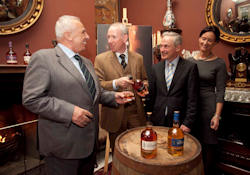 The investment will facilitate the development of a world-class, independent, craft Irish whiskey distillery; maturation warehouses and a unique visitor experience by the banks of the River Barrow in Royal Oak, County Carlow by 2016. The expansion will create a total of 55 permanent and part-time jobs in the Carlow area, over 5 years, where the whiskies will be distilled, crafted and aged. The Department of Jobs, Enterprise and Innovation, through Enterprise Ireland, is supporting this project.

In addition, the construction process will provide up to 40 jobs during the 18 month development phase which is scheduled to commence in spring 2014 (subject to planning permission).

Welcoming the announcement, the Minister for Jobs, Enterprise and Innovation, Richard Bruton TD, said:
“At the heart of the Government’s Action Plan for Jobs is our determination to create a powerful engine of Irish exporting businesses. Today’s announcement that the Walsh Whiskey Distillery Company is investing €25million in a world-class centre in Co. Carlow, with the creation of 55 permanent and 40 temporary jobs in a regional location, is a model of what we are trying to achieve. Here is an Irish SME which, with the support of Government and Enterprise Ireland in particular, has lifted its ambitions, pursued new markets, and is now creating large numbers of jobs in an area which badly needs them. I commend all involved on their efforts and wish them every success for the future”.

Irish whiskey has been the fastest growing spirit in the world in the last 5 years growing from 4.4 million cases to [6.5] million since 2008.  Drinks industry analysts expect that growth to continue with sales of Irish whiskey expected to double to over 12 million cases in the next 5 years. The expansion will enable the company to benefit from this increased demand and position it as one of the leading independent distillers of branded, premium, craft Irish whiskey. The Walsh Whiskey Distillery Company will be one of just a handful of producers of scale, of triple-distilled, branded, Irish whiskey outside of the multinational companies.

Illva Saronno’s CEO, Mr Augusto Reina, travelled from Milan with several of his colleagues to attend the announcement in Dublin. With 17th century origins, Illva Saronno’s portfolio is led by Disaronno, the world’s second largest premium liqueur, and Tia Maria. It also includes Artic Vodka, Isolabella Sambuca, Zucca, and Aurum and Sicilian Wines Duca di Salaparuta, Corvo and Florio among others. These brands are distributed in 160 countries worldwide. Illva also has a significant interest in China’s largest winery, Changyu, and a growing foothold in India, the world’s largest whiskey market (280 million cases annually).

The founder of Walsh Whiskey Distillery, Mr Bernard Walsh said: “We are delighted to be expanding our business due to strong demand for our super-premium and ultra-premium Irish whiskey brands, which are crafted in the best tradition of 19th century Irish whiskey distilling. We are especially pleased to have attracted a partner like Illva Saronno. In addition to its global reach and long term vision, Illva and Walsh share a similar style and core values that come from being family-run companies. Their experience, traditions and expertise, which come with having a 500 year old liqueur like Disaronno in their portfolio, will be fantastic assets as we set about becoming recognised as one of the leading distillers of premium, craft, Irish whiskey in the world.”

Mr Augusto Reina, CEO of Illva Saronno Holding commented, "We are extremely delighted to announce the partnership with Walsh Whiskey Distillery today. With this investment, not only will Illva gain production capacity and expertise in a fast growing sector such as that of Irish whiskey - which is already showing remarkable growth rates and is expected to grow up to 12 million cases within the next 5 years – but it will also enable Walsh Whiskey Distillery to lean on Illva as a leading business developer both in Italy and abroad.”

Founded in 1999 by husband and wife, Bernard and Rosemary Walsh from Carlow, over 14 years they have built a range of international award winning drinks brands including a portfolio of six Irish whiskies under The Irishman and Writerṣ Tears brands, the Hot Irishman Irish coffee and The Irishman Irish Cream liqueur.
The most recent award received by a Walsh Whiskey Distillery brand was for ‘Best Blended Whiskey’ by Writerṣ Tears at the inaugural Irish Whiskey Awards last week. The award, in the largest and most competitive award category, was keenly contested by a large number of entries from the burgeoning Irish whiskey sector including many of Ireland’s top blends such as Bushmills Black Bush, Powers 12 Year Old Special Reserve, Tullamore Dew 12 Year Old and Jameson 12 Year Old Special Reserve.
In addition to the founders, Walsh Whiskey Distillery has built a highly experienced Board and advisory team comprising seasoned executives from the global wine and spirits sector, including:

Led by founder Bernard Walsh, together the Walsh Whiskey leadership team has overseen revenue growth of 300% in the last 5years. With 95% of sales generated by exports, the Walsh Whiskey Distillery Irish whiskies are distributed in 30 countries. Five key markets currently account for 70% of sales, these are: the United States, Russia, Scandinavia, France and Germany. In partnership with Illva Saronno and its existing distribution partners, the company plans to gradually expand its network taking in major Asian markets, including India and China, where Illva has significant operations. In anticipation of this expansion the company undertook a comprehensive brand audit earlier this year with the support of Bord Bia.

In early spring 2014, Walsh Whiskey Distillery will submit a planning application for the development of a distillery, maturing warehouses and a visitor centre on 40 acres of pastoral land bounded on one side by the River Barrow at Royal Oak in Carlow. The estate includes an 18th century country house that will be restored as part of the development plan.

The plan is for the distillery, with capacity to produce 400,000 cases annually, to become operational in 2016. It will have two production lines using both pot stills and column stills which will facilitate Walsh Whiskey Distillery producing all four types of Irish whiskey, namely; pot, malt and grain and blended. The distillery will also have the capacity to distil whiskey under contract for selected private labels most of whom have no means of production. The planned distillery visitor centre will cater for 75,000 ‘whiskey tourists’ by 2021.

Irish whiskey is resurgent worldwide after falling from its position as one of the world’s leading whiskeys in the 19th and early 20th centuries. 100 years ago, 12 million cases of Irish whiskey were sold annually but a combination of factors including non-adoption of column stills, US prohibition laws and Ireland’s post-independence trade war with Britain all contributed to its demise leaving the way clear for Scotch to become the dominant whiskey genre.

Ireland Inc’s 21st century whiskey opportunity is reflected in Scotland’s achievements in the sector. Annual sales of Scotch has now grown to 90 million cases, yielding over €5 billion in export sales while supporting 35,000 jobs across 109 distilleries.

C.W. Downer & Co., a leading global middle-market investment bank, brokered and structured the deal through its offices in Dublin and Paris. Hughes Blake provided both corporate finance and company secretarial services. The legal contracts were signed and sealed at the offices of Eugene F Collins on the 3rd October 2013. 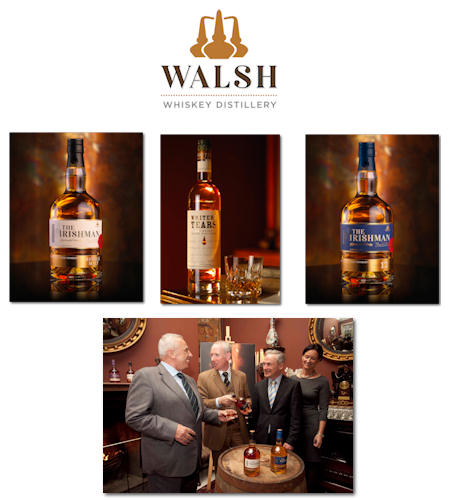