The below article is from the BBC website (link below). The Johnine Walker planet in Kilmarnock 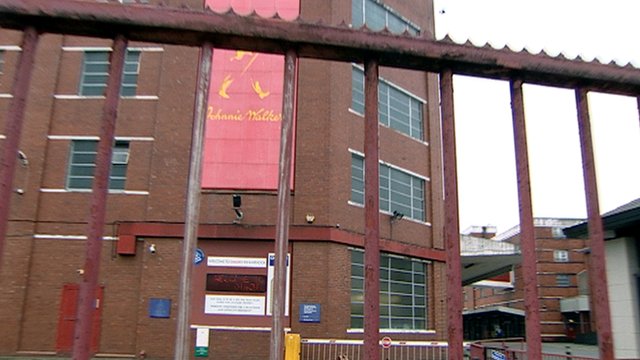 The historic link between Kilmarnock and Johnnie Walker whisky has come to an end after 192 years.

On Friday, the last Red Label was bottled at the Ayrshire plant before the final shift clocked off.

The world's largest distiller, Diageo, announced in 2009 that it was closing the Kilmarnock facility, where more than 700 people were employed. Some staff are moving to other jobs, others have agreed to severance pay, and 82 are being made redundant. The closure announcement sparked local protests and an angry reaction from First Minister Alex Salmond. But he failed to persuade Diageo to keep the plant open.

Since then, nearly 200 staff have found other jobs with the company, most in Glasgow, with a few moving to the expanded bottling plant in Fife.

Workers laid flowers outside the plant in Kilmarnock

A total of 430 workers agreed to severance pay, and 82 have been forced into redundancy.

The last bottle of Johnnie Walker Red Label is destined for a local exhibition of the brand's history, which goes back to the first sale of Walker's Kilmarnock Whisky in 1820. A third of Diageo's land in the town is being given to Kilmarnock College, while it decides what to do with the rest of it. Staff at the plant are being invited back to a party this summer, when each will be presented with a limited edition special bottle of Johnnie Walker.

This article is from the BBC website and you can see the whole article in full at http://www.bbc.co.uk/news/uk-scotland-glasgow-west-17486173 . On this page you can watch a video of the final day at the plant.