Isle of Skye is the Winner at the Scottish Grand National - 25th April, 2012 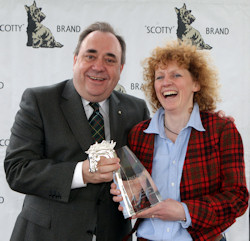 Scotland’s leading National Hunt yard, Arlary House has earned a strong reputation, sending out winners the length and breadth of Britain, from Perth to Cheltenham.  It has been a record-breaking season for Arlary House, having over 55 race wins, including Brindisi Breeze, who won the Albert Bartlett 3 mile Novice Hurdle at this year’s Cheltenham Festival race – the first Scottish Cheltenham winner for 10  years.  Brindisi Breeze is owned by Sandy Seymour from St Andrews, was ridden by Campbell Gillies from Haddington and trained by Lucinda Russell, both of whom are sponsored by Isle of Skye Scotch Whisky. 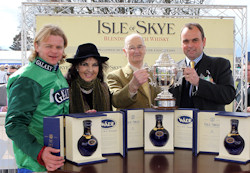 Lucinda Russell owner of Arlary House Stables and winner of the Isle of Skye Blended Scotch Whisky Scottish Jump Trainers’ Championship Award 2011/12, said: “I’m really proud to have won this prestigious award.  The hard work of the Arlary team and support from everyone, including the Scottish public and especially Isle of Skye Whisky has been incredible.

“This is the second year that we’ve sponsored the Scottish Champion Hurdle at Ayr Racecourse.  The event’s values of tradition and excellence sit neatly with the exceptional qualities Isle of Skye 8 Years Old Blended Scotch Whisky possesses.  Both are in perfect synergy in terms of their Scottish roots, passionate commitment to achieving excellence and determination to be the best.”

The Scottish Champion Hurdle was first run in 1966 when the winner was Blue Venom. It was awarded Grade 2 status in 1991 and was run on the opening day of the two day Scottish Grand National meeting until 1994 when it moved to the Saturday.