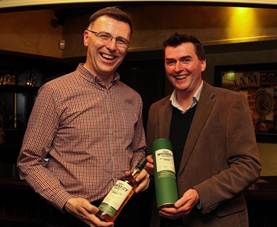 The Irish Whiskey Society Single Cask Whiskey comprises the entire contents of one ex-bourbon cask – cask number 1038 - which was chosen by the members of the IWS at a tasting event in the Old Jameson Distillery in April of this year. With just 204 bottles produced, this exclusive release is only available to members of the IWS. 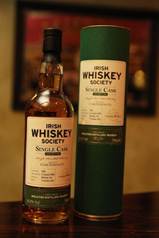 The Irish Whiskey Society Single Cask Whiskey is a 17 Year Old Single Pot Still Whiskey which has been bottled at 55.2% ABV. The cask was filled on the 13th January 1995 and was bottled on the 17th October of this year (2012). Single Pot Still Whiskey is unique to Ireland and to the Midleton Distillery in particular. Made from a mash of malted and unmalted barley that is then triple distilled in traditional copper pot stills, this style of whiskey is renowned for its full, complex flavours and smooth, creamy mouth feel.

Barry Crockett, Master Distiller for Irish Distillers Pernod Ricard, says: “We are delighted to have collaborated with the Irish Whiskey Society for this unique and exclusive distillation of one of our select aged whiskey casks. It was a pleasure for us to partner with the IWS to select and produce a product which celebrates both the best of Irish Single Pot Still Whiskey and our special relationship with them. The fact that the whiskey has been selected by its members, for its members, has made the project most enjoyable.”