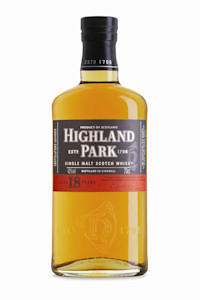 Highland Park 18 year old has become the first Scotch whisky to be inducted into The Spirit Journal Hall of Fame.

The Hall of Fame has been created by Spirit Journal editor F. Paul Pacult, in recognition of brands that have consistently exhibited extraordinary quality over the course of numerous Spirit Journal reviews.

One of only five inductees, Highland Park is also the only ever spirit to be awarded the prestigious Best Spirit in the World, receiving the accolade in both 2005 and 2009 for its 18 year old single malt.  It will now be officially ‘retired’ into the Hall of Fame to take its rightful place in the history of the world’s finest spirits.

Gerry Tosh, Head of Brand Education at Highland Park, said: “Being the only Scotch to be awarded the Best Spirit accolade, and doing this twice, was an amazing achievement in its own right, but now to be the first Scotch inductee to the Hall of Fame, really shows the status the Highland Park as achieved.  We are extremely proud of our Orkney single malt.”

Pacult said of Highland Park and the four other spirits inducted into the hall of fame: “Among the scores of superlative spirits that have received five stars in the journal, these five have come to represent distillation and production at their finest. These spirits are bona fide icons.”

The Spirit Journal, a quarterly publication, was established in 1991 and is widely acknowledged as the most trusted newsletter on spirits, wine and beer in America. It does not accept advertising and as such offers unbiased reviews and ratings that are considered the gold standard within the alcoholic beverage industry.

Click to see the range of Highland Park Malts