The Glenlivet launches new global communications campaign - 'IT ALL COMES BACK TO THE ORIGINAL' | 20th November, 2014 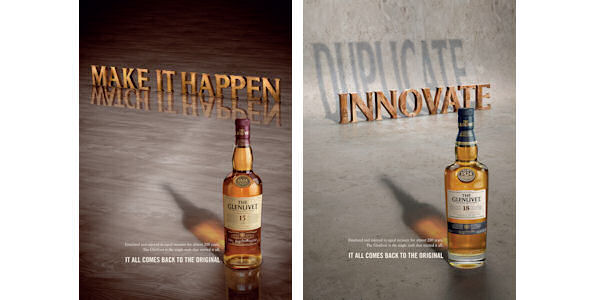 The Glenlivet, the single malt that started it all, has announced the launch of its new global communications campaign: ‘It All Comes Back To The Original’.

The campaign, which is rolling out around the world now, aims to capture and celebrate The Glenlivet’s spirit of originality, communicating its role as a single malt with a style to which others can only aspire and encouraging the same originality from its fans.

Developed to engage directly with discerning men in emerging, developing and mature malt markets, the campaign assets include a film for TV and online usage, print, out of home and digital banners. Following a successful launch in the US last month [October], spearheaded by the TV Commercial, the campaign is now rolling out globally.

The creative features inspiring words that relate to The Glenlivet’s reputation for setting the quality, craft and style benchmarks of the Speyside region. These words are presented in a bold, confident style and, in each creative, a word with the opposite meaning is then further shown as a shadowed reflection.

Furthermore, the look and feel of the headline words in the print, out of home and banner advertisements are inspired by authentic distillery materials such as copper, oak and steel.

The campaign film is shot with a balance of tradition and heritage with contemporary imagery, and depicts the comparative sets of words against the renowned Speyside landscape and the bustling distillery during the production process, reinforcing the premium and craft credentials of the range.

Nikki Burgess, Global Brand Director for The Glenlivet, commented: “2014 has been a landmark year for The Glenlivet – a result of consistent innovation, the buoyant global malt market and our on-going commitment to setting the quality benchmark for Speyside.

“We expect the market’s dynamism to remain and, with this new global advertising campaign, we are confident that we will engage and inspire consumers with the core values of The Glenlivet. In speaking directly to discerning men and conveying The Glenlivet’s crafted quality and originality, we hope to engage with them as they seek to be originals in their own lives too.”