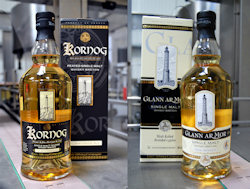 Glann ar Mor, the artisan distillery from Brittany is delighted to announce it has appointed FC Whisky for the distribution of its whiskies in Denmark.

Jean Donnay, the designer and owner of Glann ar Mor distillery said "We are thrilled to start in Denmark with FC Whisky who share the same uncompromising and passionate attitude about whisky as we do ourselves."
FC Whisky who are based in Vejle represent some reputed whisky producers such as Kilchoman and Vintage Malt Whisky Co.

Glann ar Mor is a craft distillery producing its whiskies by the seaside on the Northern coast of Brittany in pure Celtic tradition, doing it the old fashion way with live flame heating for its two pot stills, worm tub condensers, wooden washbacks and ultra slow distillation.

The un-peated Glann ar Mor and the peated Kornog are being introduced in Denmark during the second half of November, including a few rare bottles of the the casks strength/single cask Kornog "Taouarc'h an Hañv 2012" @ 58,7%, otherwise now sold out everywhere else.

Both single malts are already well established within the whisky community, having benefited from multiple awards and tasting reviews, including in particular a "Liquid Gold Award" for Kornog in the three latest editions of Jim Murray's "Whisky Bible".