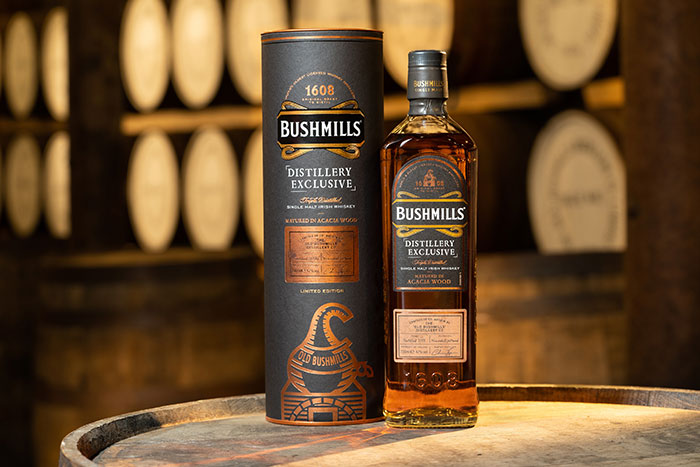 With only 12,000 bottles available in its first release, the DISTILLERY EXCLUSIVE is a non-chill filtered single malt whiskey with a higher ABV strength of 47%. The whiskey is first matured in charred bourbon barrels and toasted sherry casks, and then aged in Acacia wood for more than a year.  Acacia wood has existed on Earth for more than 20 million years – a testament to its indestructibility. This is the first time Bushmills Irish Whiskey has matured whiskey in Acacia.

Helen Mullholland, Master Blender at Bushmills Irish Whiskey, said: “As the world’s oldest licensed whiskey distillery, it was only natural that we create a whiskey using one of the world’s oldest woods. We are always exploring new ideas and looking for new woods to experiment with, so we were keen to work with Acacia, as the product imparts a spicy, vanilla flavour into our famous whiskey. The taste of the DISTILLERY EXCLUSIVE is subtly spiced by the casks, with warming hints of nutmeg. The liquid features honey and floral notes complemented by sweet vanilla and dried fruit flavours, finishing with a hint of cinnamon and a whisper of wood.”

Mullholland adds: “We continue to see a demand for ultra-premium expressions, and with more than 120,000 visitors to The Old Bushmills Distillery each year, they like to see something special they can only find in our store. With more than 400 years of whiskey-making heritage to our name and as one of the first distilleries to create a single malt whiskey, this first release of the DISTILLERY EXCLUSIVE will be a favourite among both visitors discovering whiskey for the first time and longtime whiskey drinkers seeking a new single malt with the quality and taste we’re famous for.”

Taste: The sweet spice intensity develops from the first taste, creating a creamy mouthfeel. Honey and floral notes rush in, marrying with the sweet vanilla and accentuated dried fruit flavours. Ends with hints of wood intermingled with cinnamon.