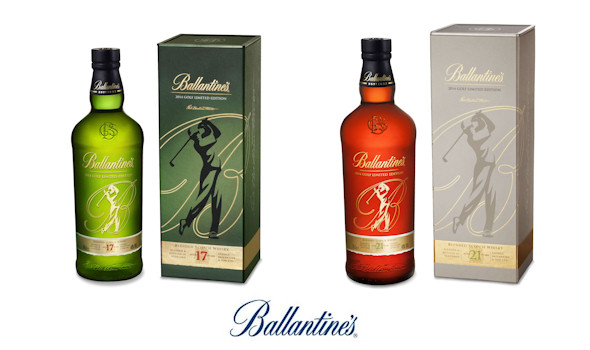 Ballantine’s, the world’s No. 2 Scotch whisky, has today announced the 2014 release of its popular Limited Edition Golf Packs, available for its 17 and 21 Year Old blends.

Ballantine’s has a long-standing association with golf, dating back to 1960. The Limited Edition Golf Packs, first launched in 2012, are designed to reinforce the shared values, provenance and heritage between the renowned Scotch whisky and one of Scotland’s most revered sports.

Peter Moore, Ballantine’s Global Brand Director, said: “We are excited to release this year’s Ballantine’s Limited Edition Golf Packs, which stay true to our golfing heritage and support our ongoing presence within the sport. The packs have resonated well in the past with both whisky fans and golfing enthusiasts, and we expect the consistently high quality of these whiskies to ensure that this year’s release is equally well received.”

In 2013, Ballantine’s 17 Year Old was named ‘Scotch Blend of the Year’ for the fifth consecutive time in the 2014 edition of the much revered ‘Jim Murray’s Whisky Bible’. The Scotch whisky was given 97.5 points out of 100, and was described by the whisky expert as “one of the most beautiful, complex and stunningly structured whiskies ever created” and “truly the epitome of a great Scotch.” Both the 17 and 21 Year Old were also awarded gold medals in the 2013 Hong Kong International Wine & Spirit Competition.