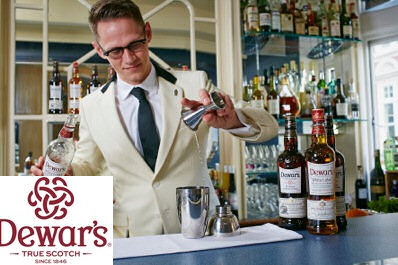 Tom Walker, bartender at The American Bar in The Savoy in London, which Tommy Dewar regularly frequented during his 26 year stay at the hotel, poured over classic cocktail bibles and picked through archive serves to select a series of heritage whisky cocktail recipes. He then adapted these with modern ingredients, techniques and garnishes to create the DEWAR’S TRUE SCOTCH collection.

The collection perfectly captures the DEWAR’S philosophy – TRUE SCOTCH SINCE 1846™ – and the brand’s status as the definitive blended Scotch whisky, distinguished by its peerless provenance, quality and craft.

Tom Walker comments: “The DEWAR’S TRUE SCOTCH collection was inspired by a cocktail-making ideology of ‘imaginative simplicity’ that is synonymous with the era and style of Harry Craddock - one of the most famous cocktail barmen of the 1920s and 1930s, who tended The American Bar when Tommy Dewar resided here at The Savoy when building works commenced on his former property at St James’s Street. Like Harry’s, the cocktails in this collection are classically styled and each can be traced back to some of the most iconic Scotch cocktails ever created, including the Rob Roy, Old Fashioned and Whisky Sour. However, each has an imaginative and untraditional twist that gives this collection of DEWAR’S cocktails a completely contemporary edge.”

The collection brings to life the craftsmanship of bartending and the remarkable heritage of DEWAR’S, while also raising a toast to the redesign of the whisky brand’s packaging and bottle design. This recent visual evolution to the Scotch brand founded by John Dewar in 1846 took it into the future, as the TRUE SCOTCH collection has done with the most classic of cocktail recipes.

The new packaging illuminates DEWAR’S remarkable heritage, enabling consumers to hold a piece of the DEWAR’S story in their hands every time they pick up a bottle. This story is expressed in every detail – from the bold colors, stoppers and seals to the bespoke typeface – all inspired and sourced from the extensive brand archive in Scotland. The most distinctive feature of the new DEWAR’S look is the trefoil Celtic truth knot that has been embossed onto the glass of every bottle. A powerful visual representation of DEWAR’S strength and longevity shows three interlocking ‘D’s that represent the three founders who first created the whisky – John Dewar and his sons, John Alexander Dewar and Tommy Dewar.

The DEWAR’S TRUE SCOTCH collection can be enjoyed at The American Bar in The Savoy, or recreated at home with the recipes below:

“This is a riff on the Scofflaw – a cocktail originally made with American whisky. The serve reflects a time when blended Scotch started to become popular in the USA, mainly thanks to the work of Tommy Dewar, at the end of the 19th Century. This was the same time that a liquor tax under the guise of ‘Raines Law’ was also introduced.”

Add all ingredients to a cocktail shaker and blend to emulsify the ingredients. Add ice, shake vigorously and strain into a chilled coupette. Garnish with a lemon twist and serve.

“This takes inspiration from the ‘Malecon’, a drink by Erik Lorincz. The Rubicon is a Scotch sour made with completely untraditional ingredients, specifically the lime and port. The bitters give the drink length, and the egg white provides body and texture. The name is a reference to the cross over into using alternative ingredients, and thus creating an alternative whisky sour.”

Add all ingredients to a cocktail shaker and blend to emulsify the ingredients. Add ice, shake vigorously and strain into a chilled coupette. Serve naked. 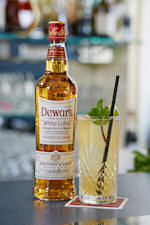 “The name of this drink chimes with the surging popularity of classic Scotch cocktails named after famous national luminaries, such as the Rob Roy and Bobby Burns. This time our luminary is Henry Raeburn – a Scottish portrait painter that Tommy Dewar favoured. The use of lime and Drambuie create a drink that is refreshing and rich in equal measure."

Add the first four ingredients to a cocktail shaker. Shake hard but briefly, and strain into a Collins glass. Top up with soda, garnish with a sprig of mint and a lime wedge and serve.