Latest Whisky News from the The Scotch Whisky Association

In the calendar year 2016, exports of Scotch Whisky increased in value by £153 million to more than £4 billion (£4,008,927,149), and by volume to the equivalent of more than 1.2bn bottles1 an increase of 4% and 4.8% respectively. This is the first time since 2011 that both value and volume of Scotch exports recorded positive annual growth rates, and the first time ever that Single Malt exports have exceeded £1bn. But bottled Blended Scotch Whisky is still by far the biggest category. It accounted for 69% of all Scotch volumes and values exported in 2016. 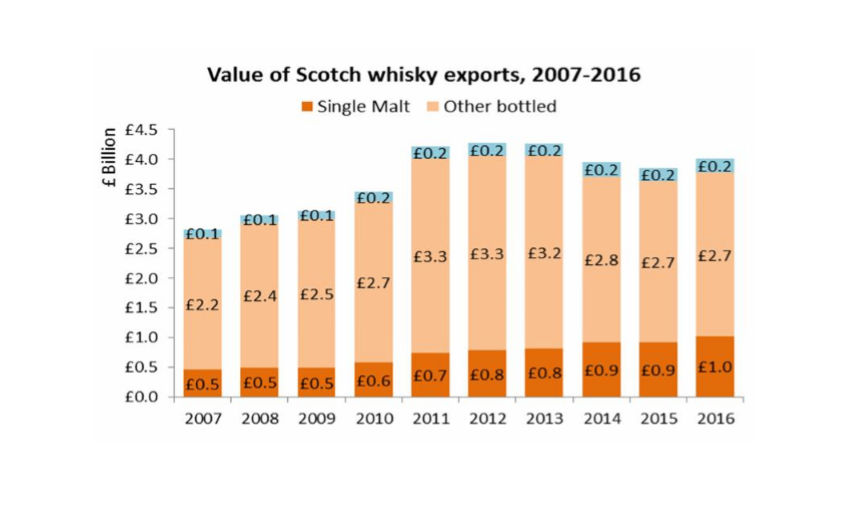 Context
In 2016, the UK exported just under £302 billion worth of goods2, an increase of 4.9% year-onyear and back to similar levels reported in 2012. Scotch Whisky therefore accounted for 1.3% of the total value of all UK goods exports (including oil).

Given that the industry demands relatively few imports3 (casks and some raw materials), Scotch Whisky provides a considerable positive contribution to the UK balance of trade. In net terms Scotch Whisky remained the biggest contributor to the balance of trade in 2016 – ahead of other sectors such as aircraft, cars, medicinal and pharma, electrical machinery and crude oil. Beverages (in total, including Scotch Whisky) provide a positive impact to the trade balance of £690m, although this is lower than the contribution of Scotch due to the importation of almost £6.2bn from overseas ie without Scotch exports the trade in beverages would add to the overall deficit.
In 2016, without the impact of the Scotch Whisky industry, the UK trade in goods deficit would have been £3.8bn wider or 2.8% worse off at almost £139bn.

3 Import data estimated on previous industry studies and amended to include the potential impact of the depreciation of sterling in 2016. 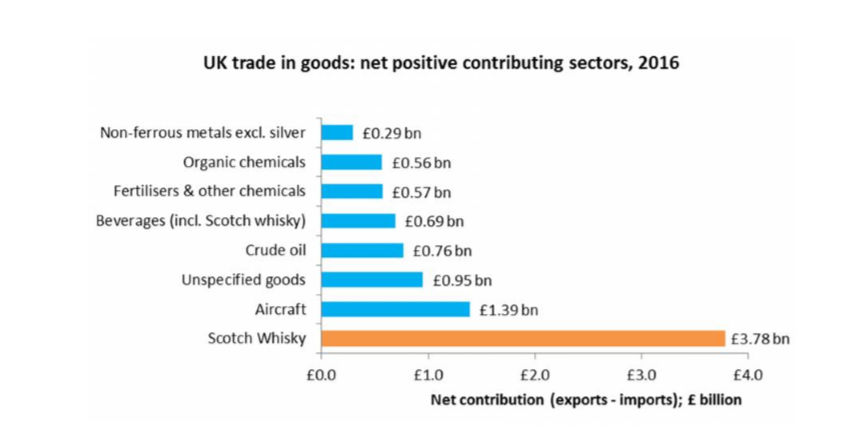 Exchange rates: Following the vote for the UK to leave the EU on Thursday 23 June 2016, the value of sterling depreciated considerably, effectively making UK products sold abroad more attractive from a pricing perspective. While there is likely to have been a positive skew to the overall figures, any fundamental shift in demand and supply may be more apparent in 2017 returns.

UK and the European Union.

During the process of the UK exiting the EU, the Scotch Whisky industry will face challenges although there are also potential opportunities if the industry's priorities are delivered. The industry supports open and liberal trade. So both ensuring a deal which allows smooth movement of goods from the UK to Europe and securing the benefits from existing EU trade deals are major objectives. Under World Trade Organisation (WTO) rules, Scotch will continue to benefit from a zero tariff on exports to the likes of the EU and USA. However, if we are outside the EU's network of bilateral trade deals, there is a risk of losing benefits, including lower tariffs, in markets representing around 10% of exports.

The Scotch Whisky Association has detailed the priorities in a Brexit briefing paper. These include negotiating the transition of benefits from existing EU trade deals and the UK developing its own FTA network in the future.

The immediate impact on trade figures will largely be driven by the usual market access issues and currency fluctuations as detailed above with the medium to longer term issues more dependent on trade negotiations and agreements.

Global Situation
Scotch Whisky was directly exported to 182 different countries in 2016, up from 174 in 2015. While the exact number is considerable it is most likely that it is an underestimate due to the nature of distribution links and the number of hubs globally. Indirectly, Scotch is likely to reach more than 200 countries worldwide. Despite the long list of export countries, due to the stage of development of some major markets, combined with the number of re-distribution hubs worldwide, approximately 80% of Scotch exports by volume and value are supplied to the top 25 markets4.

The European Union remained the most valuable region for Scotch in 2016, growing 3.6% in value to £1.24 billion. Volumes increased at 8.6% indicating greater competitiveness within the region. 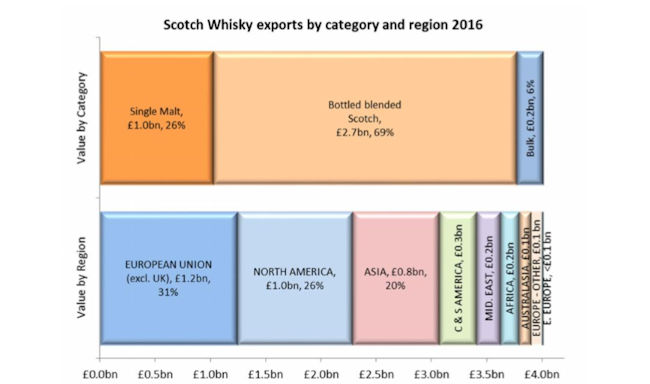 North America strengthened its position as the second most valuable region for exports – reporting 10.6% growth to surpass £1.0 billion in value – largely driven by a 17% increase in the value of Single Malt exports and supported by growth in other bottled product too.

Asia experienced a mixed year logging 1.8% growth in value in 2016 to account for one-fifth of all Scotch exports. While Asia is ranked third in value terms, in volume terms it is the second largest region globally, and this was consolidated in 2016 due to a 5.9% increase in deliveries driven by growth in the bulk sector.

Despite the remaining six regions accounting for less than a quarter of exports, there is significant interest in many markets with seven countries being on the top value/volume list5.

Taking the top 25 destinations for Scotch Whisky we can assess where growth has been driven and also where headwinds remain. While a number of markets represent re-distribution hubs for further transit, displaying a smaller number of markets provides the opportunity to investigate the global picture one layer below the headline figures of solid growth in value and volume.

Of the top 25 markets, 14 recorded a positive increase in value with 15 reporting higher volumes year on year (see bubble chart below).

The USA is notable for its scale and it remained the largest market by value (represented by the area of the circle) with a 14% increase in value to £856m while volumes increased at a more conservative rate of 2%, confirming the continued premiumisation in the market.

Globally, the US accounted for an additional £106m worth of Scotch exports – equivalent to 69% of the overall growth in total values exported.

While the American market was dominant in the growth of Single Malt performance in 2016, the 11% growth in value of Bottled Blended Scotch Whisky was the key driver for growth, accounting for an additional £56m in exports (eclipsing the also-significant Single Malt growth contributing an additional £48m).

The UAE and the Dominican Republic were other markets which demonstrated increased premiumisation or a significant change to the product mix in-market, a result of considerable growth in value relative to a marginal increase in volume. Australia also saw a similar growth in values albeit at the expense of lower volumes over the year.
Markets such as Italy, Spain and Poland grew notably, with value growth outstripping volume performance while Germany and India experienced strong value growth in line with volume growth. This is positive news for dominant, sizeable Scotch Whisky markets.

Volume growth among the top 25 markets was driven by deliveries to hubs and transit points such as Singapore and the Netherlands as well as markets such as Japan (which uses Scotch in its blended whiskies) where it exceeded the growth in value indicating a change in the product mix in-market or a drive for increased competitiveness. Latvia is the most notable outlier with growth of almost 30% in volume terms due to transshipment of product into Russia. Despite volume growth exceeding value growth, exports to Latvia contributed a further £8.3m (a 16% increase year on year to almost £59m). 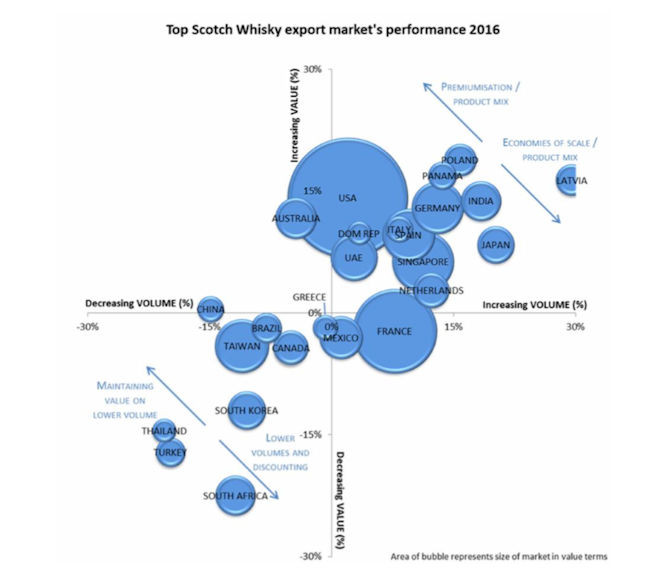 France and Mexico both grew in market volumes although the contribution made to total global value was negative year on year. The French market accounted for a quarter of the additional volumes which were exported in 2016 – a result of increased deliveries of Single Malt, other bottled Scotch and bulk Scotch Whisky.

While there were a considerable number of markets growing in 2016, there were still others which tempered overall growth. For those markets which declined in volume in 2016, the majority held on to a disproportionately high value of the market – ie while volumes dropped, value did not drop to the same degree such as Brazil or Taiwan. And on a micro level, there are largely specific domestic issues which have impacted individual performance such as economic challenges in Brazil or social and political headwinds in Turkey. Additionally, there are several large developing markets which have benefited from considerable annual growth and so a correction in performance is not unexpected, such as in Mexico.

Single Malt and the USA lead premiumisation growth…
Single Malt Scotch Whisky was the stand-out performer in category terms during 2016. More than 113m bottles of Single Malt were exported and the valuation surpassed £1 billion for the first time in history. Growth in volumes of 10% were matched by, and marginally exceeded, increased values of exports of 11.8% indicating continued premiumisation. However, overall results were not reliant on the increased valuation of the category.

With the volume of Single Malt exports growing at a faster rate than that of Scotch overall, market share for Single Malt is increasing although volumes in 2016 accounted for only 9.3% of all Scotch Whisky exports. The value of those exports, however, reached 26% and the importance of the category cannot be underestimated. While growth in volumes has been strong in recent years, the value growth has regularly outstripped the growth of those additional supplies.

While the US was dominant in additional Single Malt exports – an additional £48m worth of Single Malt was exported to the US - 90 countries in total increased their receipts of Single Malt accounting for an additional £80 million. Germany, France, Australia and Spain accounted for notable additional exports (worth £243m aggregated) although markets with considerable potential also saw strong growth in the category such as China (up 66% to £12.9 million), India (up 31% to £7.2 million) and Mexico (up 18% to £9.4 million).

Unsurprisingly Single Malt exports receive many plaudits with growth rates in 2016 and in recent years although 69% of both volume and value of exports are in other bottled6 format leading growth category-wise.

Therefore a more modest 3% growth in other bottled volumes equates to an additional 6.8 million lpa exported (or 24m bottles of Scotch), 136% more than the additional number of Single Malt bottles (10.3m) exported in 2016. And value increased for the first time since 2012 by 1.4% to £2.75 billion.

Given the scale of the global market there are different drivers behind market performance with the top two markets – USA and France – detailing contrasts quite well. The US market can be categorised by modest volume growth of 1.7% year on year but premiumisation is key with a change in the product-price mix being the main driver for growth in value of 10.8% to £573 million. The French market developed in volume terms, reporting a solid 4.2% growth rate.

Among the top 10 destinations for non-Single Malt bottled Scotch Whisky, eight reported growth in volumes in 2016 with only South Africa and Brazil returning a drop in volume. Value in the category was, as the overall headline figures indicate, more difficult to achieve with only five of the top 10 markets reporting positive growth.

However, from a global perspective, more countries (89) reported an increased valuation on their Scotch in 2016 compared with those (86) which were supplied with higher volumes.

Conclusion
To sum up, 2016 returned positive headline results for Scotch Whisky exports – for the first time in a couple of years of zero growth or marginal declines. And these results represent an achievement given the continued domestic and global challenges and headwinds which the industry faces.

As a global export, the situation for Scotch inevitably has its peaks and troughs dependent on micro or macro issues which could be at either end of the supply chain – or at any point inbetween. However, the competitive nature of global spirits sector should also be taken into consideration and growth in complementary and competing spirits is a factor when assessing the overall results and future potential for Scotch Whisky. 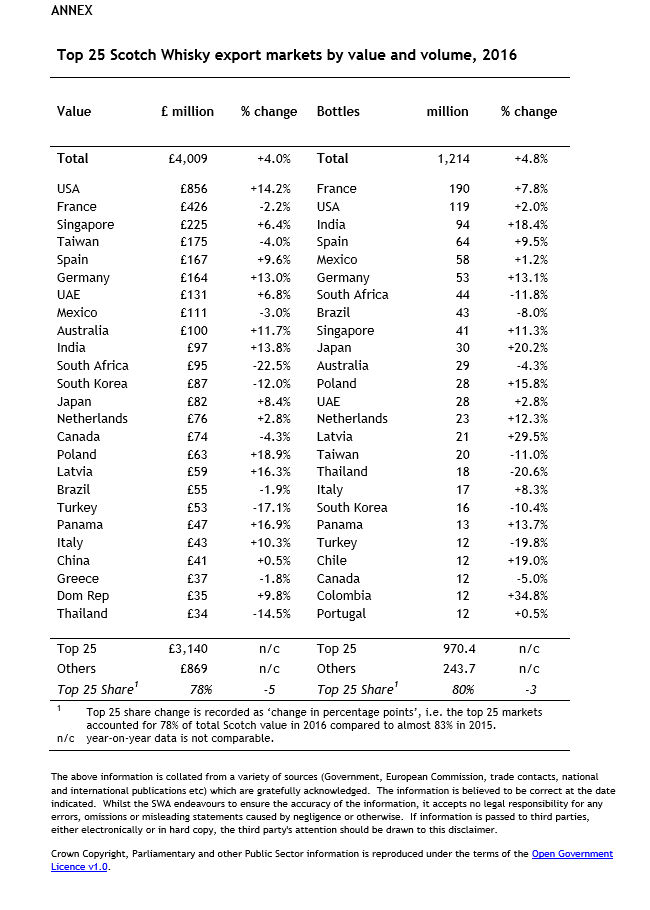