Brian Nation to take over as Master Distiller 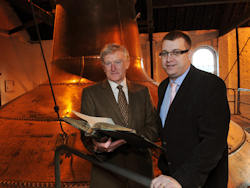 Irish Distillers Pernod Ricard today announced that Barry Crockett, Master Distiller of Jameson Irish Whiskey, will retire this March, bidding a fond farewell to the Midleton Distillery in Cork after 47 years; 31 of which he spent as Master Distiller. The announcement comes, fittingly, in the week in which Crockett was honoured by Whisky Advocate with its Lifetime Achievement award*. Brian Nation, who has been mentored by Barry Crockett for the last ten years, will take over the role of Master Distiller.

Born in the Distiller’s cottage that sits on the grounds of the Old Midleton Distillery, Barry Crockett has been immersed in the craft of whiskey distilling for almost 50 years.  At the age of seventeen, Barry began learning his craft as a young apprentice to his father and Midleton Master Distiller, Max Crockett, eventually succeeding him as Master Distiller in 1981.

During his time as Master Distiller, Barry has seen the success of Irish whiskey, and in particular Jameson, grow on an unprecedented scale. In 1984, Barry developed the award-winning flagship blend from the Distillery, Midleton Very Rare, and in 2011 oversaw the launch of the Single Pot Still Whiskeys of Midleton.  Launched to rejuvenate the popular style of whiskey to its former glory, the pinnacle of the range, Midleton Barry Crockett Legacy, marks the first time since John Jameson that an Irish Distillers product has been named after a Master Distiller. 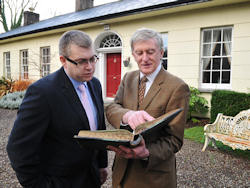 Commenting on his retirement, Barry said: “Midleton Distillery may correctly be described as important in the industrial history of Ireland; it is unique in the context of Irish Distilling. Its success is a direct consequence of an ongoing openness to innovation and development. I am fortunate to have been part of the ongoing progress from an early age. The lessons learnt from so many committed people were vital in providing the foundation essential to an appreciation of the necessity to adopt ongoing technical advances. Advance also made by a thoroughly professional work team has seen Midleton Distillery distil the most remarkable whiskey distillates in the world. As I now step down from the position of Master Distiller I am struck by what an incredible honour it has been to oversee the wonder that is the Midleton Distillery. This is especially the case as the Distillery is currently undergoing even more investment. I am particularly happy to see my successor Brian Nation take on the role of Master Distiller. I know that with his guidance the future of the Distillery will see the balance between the heritage of the Distillery and the ongoing need to constantly evolve well secured.”

Peter Morehead, Irish Distillers Production Director, commented: “The Crockett family has dominated Irish distilling for more than 70 years, so Barry’s retirement truly marks the end of an era. We are really going to miss Barry - his passion for quality and his kind, gracious nature set him apart from the rest, as do his outstanding achievements. The success of Jameson, Midleton and the great whiskey brands it produces has not been a surprise to the people who know Barry and his high standards of excellence, so we are immensely grateful for everything he has done for Irish Distillers and of course the Irish Whiskey category. We wish him all the very best in his retirement."

Brian joined the Midleton Distillery, Cork in December 1997 and is currently a Distiller and global brand ambassador for Jameson. He received the Worshipful Company of Distillers Award for achieving the highest IBD distilling exam results in the world in 2006, whilst also becoming the first Irish Distiller to receive this award.

Commenting on how it feels to be the new Master Distiller, Brian Nation, said: “It’s an incredible privilege to be Barry Crockett’s successor. Barry has dedicated his life to Midleton and is a well-known figure in the global whiskey industry, so it has been a great honour to be mentored by him over the last ten years. Barry has been an inspiration to me and I am looking forward to continuing the traditions that have gone before me and to ensuring the whiskeys of Midleton continue to be enjoyed and recognised as the best Irish Whiskeys in the world.”

Peter Morehead added: “I am particularly pleased to introduce Brian as our new Master Distiller. He has learnt his craft from Barry and played a major part in the design of the Midleton expansion. He brings the perfect blend of traditional craft and modern technology. Our future is in safe hands.”

To mark Barry’s retirement, he will be honoured with an intimate dinner party on 3rd September 2013 at ‘The Housewarming’ – a special event that will be held in Midleton to officially launch the new expansion amongst other things.  Many of the close friends Barry has made during his time at Irish Distillers are expected to attend, where he will be presented with a special gift from his peers.