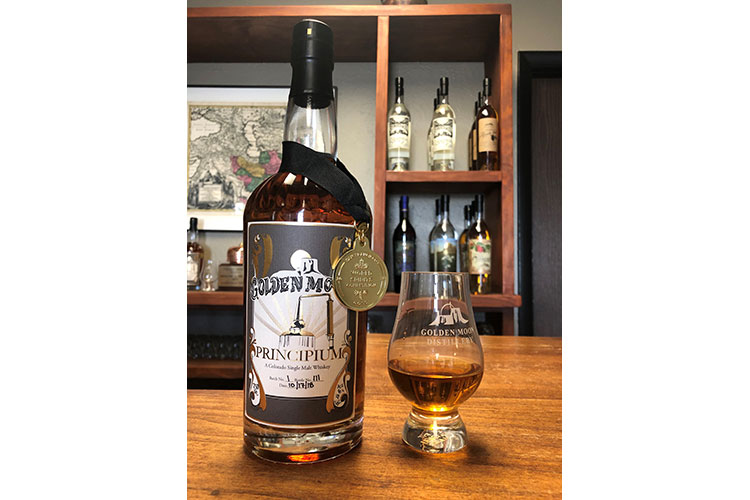 According to Mr. Gould.
We're really excited to release these two new uniquely Colorado single malt whiskies. Both are made from 100% two-row Moravian barley, grown in Colorado and the surrounding states and malted right here in Golden Colorado. Both are milled, mashed, fermented, distilled and cask-matured here at Golden Moon Distillery. We use a unique mashing procedure and a proprietary strain of yeast for fermentation for all our single malts whiskies.

Principium is a double-distilled single malt whiskey that is matured in charred white American oak casks. It is a smooth, approachable whiskey, full bodied with a malty character and nice caramel notes. It is bottled at 46% ABV / 92 Proof. It took a Gold Medal this past year at the San Francisco World Spirits Competition.

Triple is a limited release (allocated) triple-distilled single malt whiskey that is also matured in charred white American oak casks. We've only produced 500 bottles of this whiskey. I have been a consulting master distiller in Ireland for the last couple years, and that work has inspired me to play around with traditional Irish-style whiskey production techniques here at Golden Moon. This is one of the results. It is a light and friendly whiskey with a wonderful mouthfeel, slightly sweet with a touch of brown sugar character. It is bottled at 46% ABV / 92 Proof.