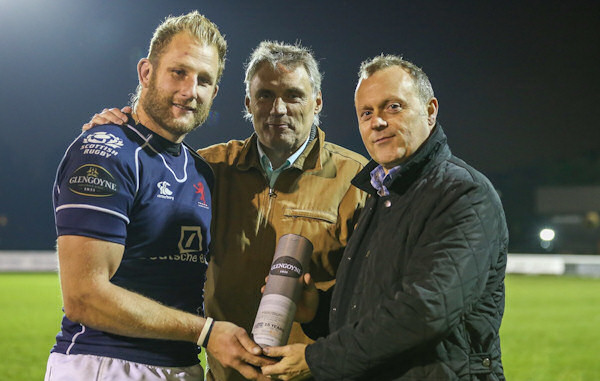 Mark Bright, London Scottish captain, was named man of the match and was presented with a personalised bottle of Glengoyne 15 Year Old. This new Glengoyne custom will be carried on throughout the season. A bottle of the 21 Year Old malt was also auctioned off to raise money for charity.

Despite a last minute defeat to Nottingham Rugby on Friday, London Scottish currently sit fifth in the 2015-16 Championship league table.

Neil Boyd, Commercial Director of Malts at Ian Macleod Distillers which owns Glengoyne, said: “Malt whisky and rugby go hand in hand and we’re delighted to be continuing our support of London Scottish for the third consecutive year.

“Despite Friday’s score, the team are doing very well and we’re proud to have the Glengoyne logo on their jersey. It’s fantastic to see the Glengoyne spirit continue to drive the team’s success and we look forward to a great season.”

Mark Kemp Sponsorship Manager of London Scottish said: “Having an iconic Scottish brand like Glengoyne show their support for London Scottish is fantastic and we’re delighted they have chosen to renew their sponsorship for the third consecutive year.

“We look forward to continuing our successful partnership over the coming season and developing a long lasting relationship between the two great Scottish brands.”