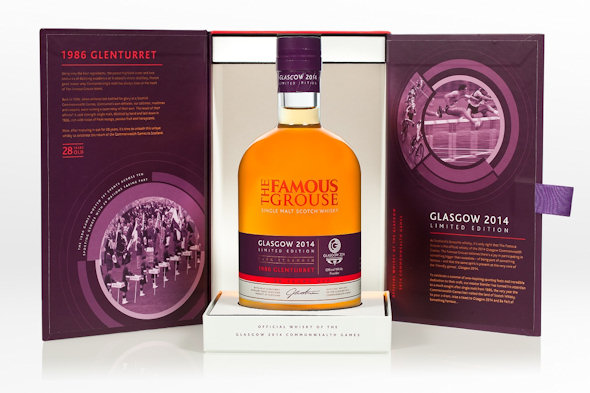 As the official whisky provider to the Glasgow 2014 Commonwealth Games, The Famous Grouse has released a limited-edition single malt to mark its sponsorship of this momentous sporting event.

This special bottling will see the release of just 1,800 bottles of Glenturret 1986 Cask Strength single malt whisky, making this a true collector’s edition.

The Glenturret single malt is one of the core ingredients of Scotland’s favourite whisky and is made at Glenturret Distillery, the home of The Famous Grouse Experience.  Commenting on why he handpicked this particular single malt whisky Gordon Motion, the Master Blender, said:

“We are extremely proud to be the Official Whisky of Glasgow 2014 and wanted to mark this momentous occasion with what we do best – whisky.

When deliberating what to release it became apparent that Glenturret 1986 was the ideal choice and very timely. Glenturret is not only integral to The Famous Grouse blend but this particular batch was laid down to age in oak casks 28 years ago, the very year when the Commonwealth Games last visited the home of Scotch whisky.

This exceptional whisky gives off notes of fresh mango and passion fruit to nose with sweet honeycomb and ripe melon to taste.

So why not, pour a dram, raise a toast to Glasgow 2014 and be part of something famous.”

This deluxe 28 year old single malt whisky will be presented in a bespoke gift box that tells the story behind the whisky and its connection to the Commonwealth Games and will be available from high-end specialist retailers priced at £150 (RRP).

The whisky brand’s sponsorship of the Commonwealth Games builds on their strong sporting links, working with the Scottish Rugby Union (SRU) as their official whisky partner for over 24 years. More recently it announced its sister brand, Ginger Grouse, as the Official Pint Partner of endurance race, Tough Mudder.

The Famous Grouse limited edition Commonwealth Games whisky is available from mid-July. Like us on Facebook to find out stockists facebook/thefamousgrouseuk. It is also available to purchase from www.thefamousgrouse.com.