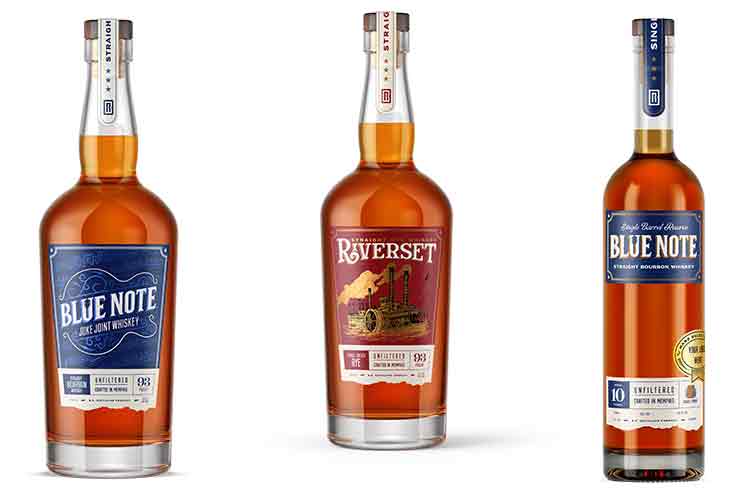 MEMPHIS, TN: Blue Note Bourbon Premium Small Batch, Blue Note Bourbon Juke Joint, and Riverset Rye were recognized recently at the 2020 MicroLiquor Spirit Awards with five Gold Medals for both taste and design. The MicroLiquor Spirit Awards is the world's first spirits competition for craft and emerging brands. The Blue Note 9 year old has also just been received an 90 point rating on Whiskey Advocate which is very exciting for everyone involved at B.R Distilling Company.

After taking home Double Gold and Gold medals in 2019, recognition is not a new accomplishment for B.R. Distilling Company. Inspired by music and driven by flavor, B.R. Distilling Company products have made a name for themselves in the spirits industry since its founding in 2013 earning numerous accolades and medals in the North American Bourbon and Whiskey Competition, John Barleycorn Awards, and New York International Spirits Competition. The company has garnered widespread popularity for its flagship brands, Blue Note Bourbon Premium Small Batch and Riverset Rye. The company's products have already acquired distribution in thirteen states, including recent expansions into Alabama, Colorado, Connecticut, New Jersey, New York, Missouri and Texas, with more on the horizon.

"We pride ourselves on making quality whiskeys with impeccable attention to both taste and detail," said McCauley Williams, President and CEO. "We put a lot of heart into our products, taking the time to hand craft each batch and bottle. We know that our customers appreciate this extra attention. These awards are an excellent indication of the hard work our entire team continues to put into making Blue Note Bourbon and Riverset Rye exceptional products. It's a team effort driven by our collective passion."

Riverset Rye is a companion to B.R. Distilling Company's bourbon expressions and stands alone as its own brand. A four-year-old straight rye whiskey, Riverset is born from a select few barrels curated to complement each other in a manner that combines an array of rich autumnal flavors. With initial, delicate hints of cinnamon apple and vanilla on the nose, Riverset is a truly unique whiskey. It is an approachable rye that can be served on the rocks or in a classic cocktail.

Riverset Rye is a small batch rye whiskey crafted in Memphis from the spirit of rock n' roll. Aged along the banks of the Mississippi River for a minimum of four years, at 93 proof, every sip tells a story. More information can be found at www.riversetrye.com