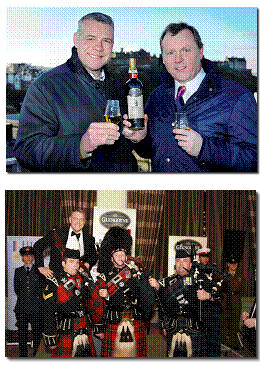 Glengoyne hosted a new sporting dinner: The Glengoyne Auld Enemy Dinner at The Balmoral Hotel in Edinburgh on Friday 3rd February 2012, bringing together rugby legends and supporters to celebrate the history of the Calcutta Cup.  Held on the eve of the world’s oldest international rugby fixture, the new event will become an annual occurrence taking place in Edinburgh and London respectively.

As well as providing warming drams throughout the evening, Glengoyne recognised the past exploits of players of this iconic game and honoured the occasion by releasing a limited edition ‘Auld Enemy Dram’, a Glengoyne 1990 Single Cask bottling.  Proceeds from which will go to their two chosen charities - Help For Heroes and The Bill McLaren Foundation.

Scott Hastings led proceedings at The Glengoyne Auld Enemy Dinner, also attended by Scotland and England ex-internationals from the past 40 years, including, Finlay Calder, Gavin Hastings, Peter Winterbottom and Matt Dawson, along with many other Calcutta Cup veterans.

Neil Boyd, Commercial Director at Ian Macleod Distillers, commented: ‘‘Glengoyne Highland Single Malt Whisky is proud to have been the official sponsor of the inaugural 2012 Auld Enemy Dinner, which was a fantastic success. Established itself in 1833, Glengoyne recognises and celebrates the passion that is synonymous with this great rivalry, and the commitment and dedication of those that compete annually for the famous Calcutta Cup.

“Glengoyne is equally proud to have teamed up with Scotland rugby legend, Scott Hastings, to support both Help for Heroes and The Bill McLaren Foundation through the release of our new limited edition ‘Auld Enemy Dram’.  They are both excellent charities which were perfect partners for the great occasion. We at Glengoyne look forward to a long association with the Auld Enemy Dinner in years to come.”

The Auld Enemy Dram has a rich mahogany colour with a heavy and robust nose of hazelnut, prunes, cocoa powder, and liquorice with BBQ spice. The palate is powerful with good balance of red apple, raisins, wafer cone and subtle citrus.  The finish maintains strength with increased fruits and dry spice.

Retailing at £195, The Limited Edition Glengoyne ‘Auld Enemy Dram’ is now available to buy at Vino’s Edinburgh  stores and online at vinowines.co.uk or at www.glengonye.com

Award-winning Glengoyne Highland Single Malt is one of the leading malt whiskies in the world and has been distilled at Glengoyne since 1833. Using methods passed down for generations, Glengoyne is made with knowledge, passion and craftsmanship.

Glengoyne is one of Scotland’s most accessible distilleries, located just 30 minutes north of Glasgow in a beautiful wooded glen overlooking the breath-taking West Highland Way.