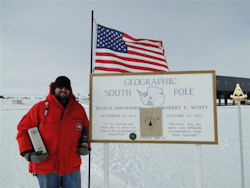 THE richly-sherried GlenDronach single malt is savoured worldwide but, in what must be some kind of a record, we’ve just heard of some fervent American fans…at the South Pole!

Thanks to GlenDronach’s New Zealand agents Whisky Galore, a team of intrepid American scientists survive sub-zero temperatures down there thanks to some invigorating bottles of GlenDronach fifteen-year-old.

Whisky Galore’s owner Michael Fraser Milne explains: “The United States Antarctic Programme (USAP) is an organisation that heads up scientific research and support on Antarctica. For many years, Whisky Galore has been a proud supporter of the scientists and crew who fly down to the ice from Christchurch where we’re based.

“We like to make sure they're staying warm with a good dram or two, and the 'ice people' as we know them are very loyal fans of Whisky Galore.

“Last year we suggested to a group of them that whoever sends us the best whisky-related photo from Antarctica will win a prize, and they certainly didn't disappoint. Pictures flooded in and the winner was one of our regular USAP customers, Thomas Da Cosse, whose pictures were our favourites.”

Michael’s colleague Stephen Le Petit added: “Thomas tasted some GlenDronach in our shop and absolutely loved it. It’s now his favourite and, as his pictures show, they help him endure temperatures of minus ninety degrees Fahrenheit.”

GlenDronach Regional Sales Director James Cowan said: “GlenDronach is enjoyed in some pretty exotic places but the South Pole is surely a world first for us. As a result, we’re claiming the record for the most southerly tasting of GlenDronach ever!”

Michael is the proud owner of Whisky Galore, New Zealand's premier whisky supplier. He is originally from the Strathspey area of Scotland and has been involved with whisky for most of his life.